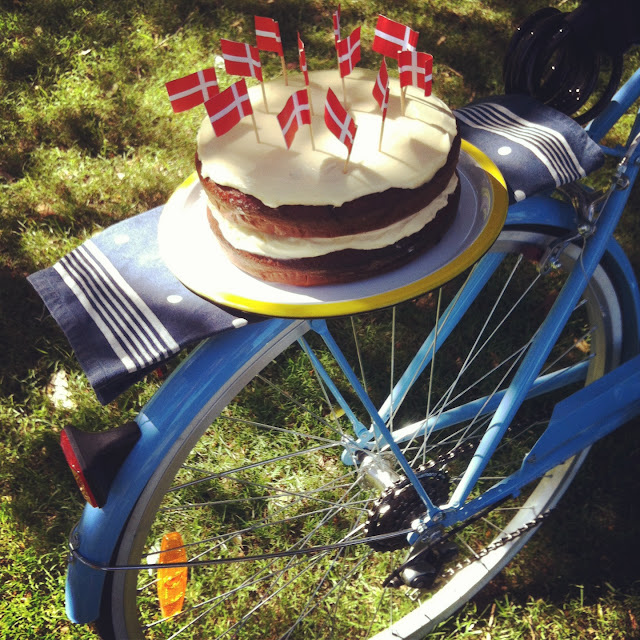 A few years ago now, I visited Copenhagen and discovered there was nothing about Denmark I didn't like. From the exquisite care taken in the design of every little thing - whether a chair in a furniture museum or a rake in a hardware store - to the open-face sandwiches on dark rye bread. The neat cobblestone streets of the pedestrian-only city centre, and the flocks of bicycles coursing by in specially designated lanes (ridden by impossibly tall, good-looking Danes) outside it... In this comparatively tiny country, there's a palpable and understandable sense of national pride among the population. So much so that it's traditional to festoon birthday cakes with miniature versions of their distinctive red and white flag. Red velvet cake is in no way Danish and alas neither am I - though I'm hopeful there's some Viking mixed up in my Scottish ancestory somewhere - but this week it was my birthday. I got a bicycle, so a picnic in the park was in order. We wheeled around on the grass, climbed trees, and played cricket with a tennis ball. It seemed only appropriate to add red food colouring to the mix. Besides, this particular cake with its startlingly red interior and pale cream cheese frosting perfectly matched these sweet little flags, carted back from Denmark as a souvenir. Clearly, it was meant to be. Even if, in my haste to document my slice so I could eat it, I neglected to orient the flag the right way around. If you're Danish, I do hope you're not offended. But I feel confident you'll forgive me if you make this cake. 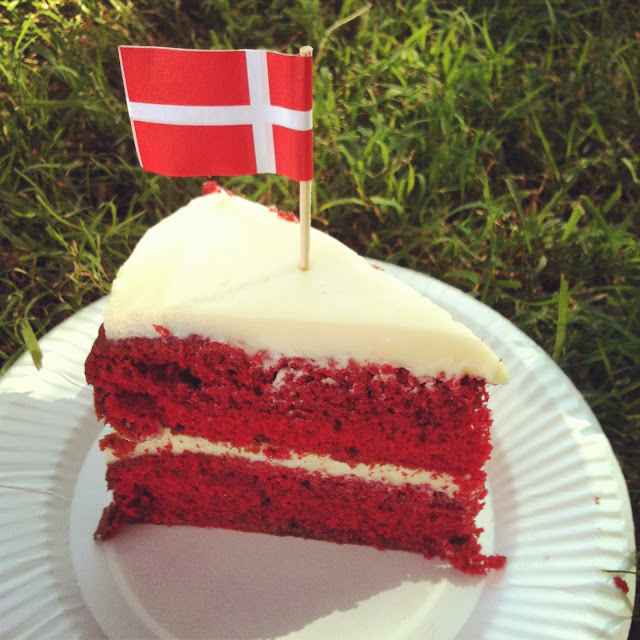 Transcending novelty value, red velvet cake is seriously good: moist, sweet and tangy. From the outside, and in taste, it ressembles a chocolate cake, emerging from the oven cocoa-brown. It's not til you cut it that you understand the meaning of its fabulously decadent name. I can assure you, it more than lives up to it.

You may need to take a knife to the tops of these cakes to get a flat enough surface to stack the layers. If you do this, I'd recommend spreading a small amount of the frosting atop each to contain the crumbs. Once that thin layer has set (refrigerate it to speed things up), you're free to frost without any worry that the pristine white will be flecked with red. And if you don't have any buttermilk in the fridge, don't forget you can make your own by adding a tablespoon of white vinegar or lemon juice to the cup of milk and waiting (no longer than five minutes) for the mixture to curdle.

Sift together flour, salt and baking powder into a medium-sized bowl and set aside. In a small bowl, mix food colouring and cocoa to form a thin paste without lumps and set that aside too.

In a large bowl, using a hand or stand mixer, cream butter and sugar together until light and fluffy. Beat in eggs, one at a time, then add vanilla and the red cocoa paste, scraping down the sides of the bowl with a spatula as you go. Add one third of the flour mixture to this, beat well, then pour in half the buttermilk. Beat in another third of the flour, then the remaining buttermilk, and finish up with the final bit of the flour. Beat until well combined, making sure everything is incorporated.

In a small bowl (I used the one the red cocoa mix was in to save on washing up) combine vinegar and baking soda. It will fizz up dramatically like a science experiment. Add it to the cake batter and fold it in with a spatula. Working quickly, divide batter between tins and place in the preheated oven. Bake for 25-30 minutes or until a skewer inserted in the centre comes out clean.

Cool cakes in their tins on a wire rack for 10 minutes, then tip them out onto the rack to cool completely before frosting.

I halved this recipe, electing to frost just the top and middle rather than the total cake. I find the richness is kept in check that way but if you do decide to go the whole hog and make the full amount, an all-white cake makes for an even more dramatic red reveal on cutting. If you're like me and find sifting incredibly boring, tip the icing sugar into the food processor first and whiz at high speed to break up any lumps.

In a food processor, blend together cream cheese and butter til smooth. Turn mixer to low speed and blend in icing sugar, salt and vanilla. Use immediately or refrigerate, covered, til ready for use (if you're on a schedule, remember you'll need to bring it to room temperature again to spread it).