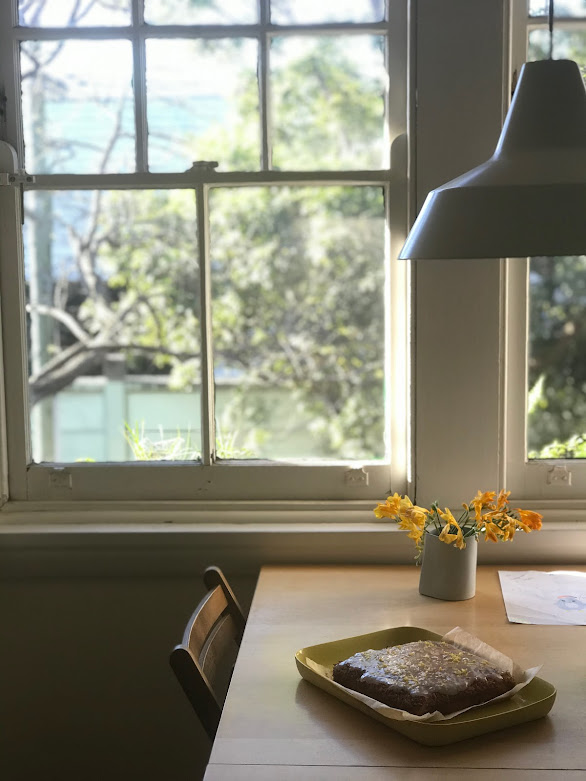 Cakes that contain sour cream are almost guaranteed to be good. I first heard about this one on the Home Cooking podcast. Samin Nosrat was raving about it so I paid attention. Samin - of chocolate midnight cake and Ligurian foccacia fame - is someone to be taken seriously. In addition to the sour cream and Samin's seal of approval, this cake also had going for it that it was super simple and featured lemons, which are cheap and plentiful right now in Australia. When I made it I wasn't disappointed - it's zippy with citrus, unbelievably soft from the coconut milk and sour cream, and in squares, easily transportable. I made it one weekend to take up to the Blue Mountains on a day trip, and the very next weekend to take across town on the train for dinner at a friend's. Its other advantage is that because it's an oil-based cake, it keeps really well and I imagine would freeze well too. Should you have any left over. I can almost guarantee you won't.

Preheat oven to 350 deg F. Grease a 9 x 9 inch tin and line with baking paper so that two long ends are hanging over the edge of the tin (allowing you to easily lift the cake out later).

Zest lemons and measure two tablespoons into a medium-sized bowl. Juice the lemons, and add 1/4 cup juice to the bowl, then whisk in oil, sour cream, coconut milk and eggs.

In a large bowl, whisk together flour, sugar, baking powder, bicarb soda and salt. Then add wet ingredients to this mixture and whisk til combined.

Scrape batter into tin and smooth out into an even layer. Sprinkle with shredded coconut and bake til a skewer inserted in the middle comes out clean - about 35 to 45 minutes. Let cool completely.

While cake is cooling, whisk together coconut milk, oil and salt, then add the sifted icing sugar to combine. Pour over cooled cake and sprinkle over lemon zest.

Cut into squares (I did 4 x 4 for 16 individual squares) and serve.