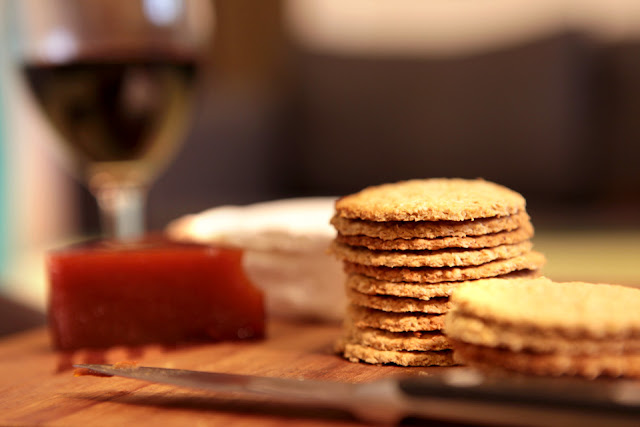 I had always loved oatcakes but I had never thought to make them myself until my friend Emily, an American writer then living in the Blue Mountains, just west of Sydney, met a Scottish novelist visiting Australia and began a long distance love affair not only with him, but this one particular specialty of his homeland.  She’d return from Glasgow bemoaning the high cost of this Scottish standard in Australian supermarkets.  I turned, as you do, to Nigella Lawson.  Of course she had the solution.  It’s amazing just how easy they are to make and how few ingredients you need, all of which are probably already in your pantry. 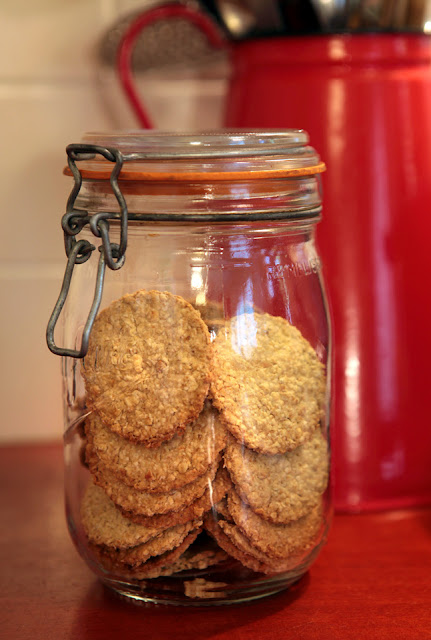 Oatcakes aren’t cakes per se, but dense, chewy, savoury crackers on which to pile all manner of good things.  I favour cheese, whether a wedge of soft brie or camembert, a sharp cheddar or a stinky blue, ideally embellished with a smear of quince paste.  There’s something pleasantly austere about these very plain biscuits.  Something straight-forward, no-nonsense.  They’re not so much moreish, as satisfyingly substantial, like a bowl of porridge.  My grandmother was Scottish and though she never made these for me, they remind me of her in some small way.  And now Emily too, since she married the Scot and lived happily ever after on a loch, far, far away.

From Nigella Lawson’s How to Be a Domestic Goddess

I usually double this recipe and make lots.  They keep well in an air-tight container.

1 cup plus 2 tablespoons quick cooking oats (if you have regular rolled oats, just blitz them in the food processor to break them down a bit)
pinch of salt
1/4 teaspoon baking soda
1 tablespoon lard or butter, melted
6-14 tablespoons very hot water (I only ever need 6)

Put oats in a bowl and add salt and baking soda.  Make a well, pour in the fat, and, stirring with a wooden spoon, enough hot water to mix to a stiff dough.

Knead it for a while to make it come smoothly together, then roll out as thinly as you can.

Cut into triangles or rounds with a knife or a cookie cutter, bake on an ungreased sheet for 15-20 minutes until the edges are turning golden brown and the oatcakes themselves are firm (they’ll crisp up on cooling). Remove to a wire rack to cool.