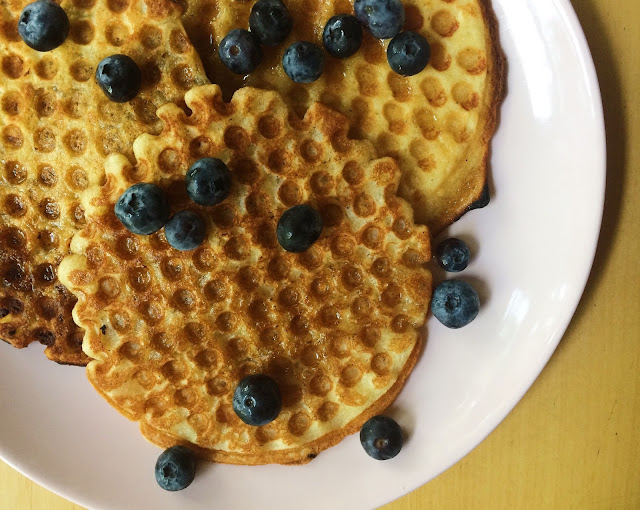 When I was a kid, my brother and I would get up early on Saturday morning and make waffles. It was a team effort. One of us measured flour, sugar, and milk, the other separated eggs. One of us melted butter, and the other took the bowl of egg whites out the front door and up the stairs to the footpath outside our house to noisily beat them into stiff peaks. All this was in the interest of keeping our parents asleep, which was in the interest of us being able to watch TV until they woke up and normal rules of the house resumed. But until then, in those dark early hours of the weekend, our life was a paradise of waffles and cartoons so it paid to keep things quiet. I'm pretty sure the electric waffle iron we had was something my grandfather won at golf. Certainly my mother would never have purchased anything so frivolous. Plus, she considered pancakes and waffles a bit déclassé, preferring instead thin, lacy crêpes. Not me! I'll take fat, fluffy and unrefined any day of the week. 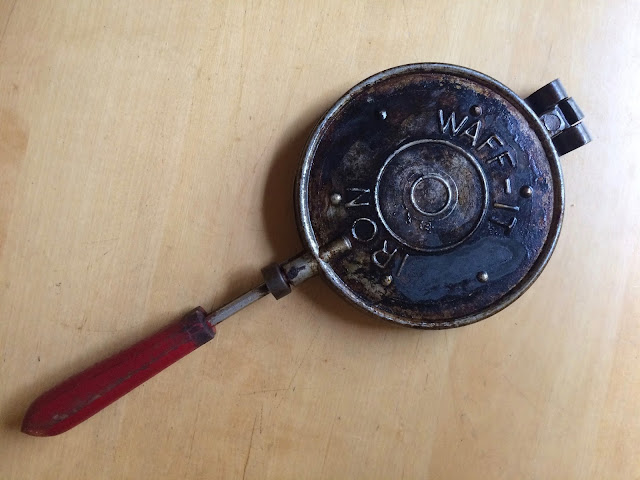 My more recent waffle memories are from a road trip I did with my dad a few years ago, in the American south. We fell in love with a fast food chain called The Waffle House, whose cheery yellow sign seemed to greet us from whatever highway we travelled or motel we ended up in. Quite frequently, we'd begin or end each day with a stop there, and one of us would always get waffles. Look at us. See. We look happy. That's what waffles do to you. 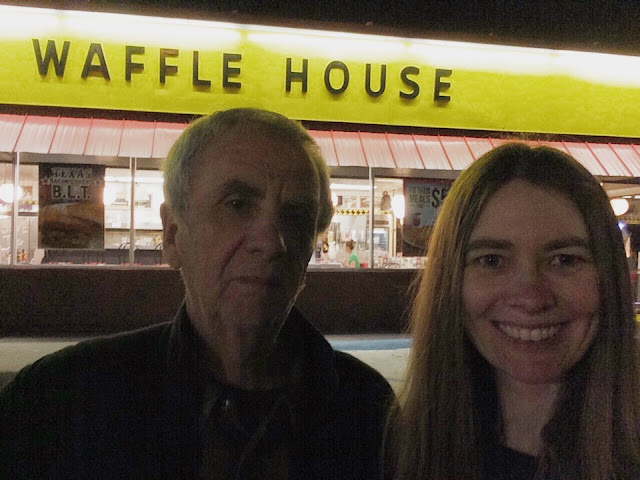 To this end I asked my dad on a recent trip down to see me if he could bring the waffle iron. Not the electric one - that died long ago, in a cloud of black, acrid smoke - but one of my grandmother's old ones that had been relegated to my parents' camping kit. I don't remember Mum and Dad ever using them, nor does my father ever remember his mother - who he inherited them from - using them in her lifetime. It's entirely possible she bought them as kitchen accessories as they're so pretty with their jaunty red wooden handles, and my grandmother did love a theme in her kitchens. Anyway, Dad duly packed it in his suitcase and brought it down and one Saturday not so long ago, I whipped up some waffles. For old times' sake. For my family. And our history of waffles. 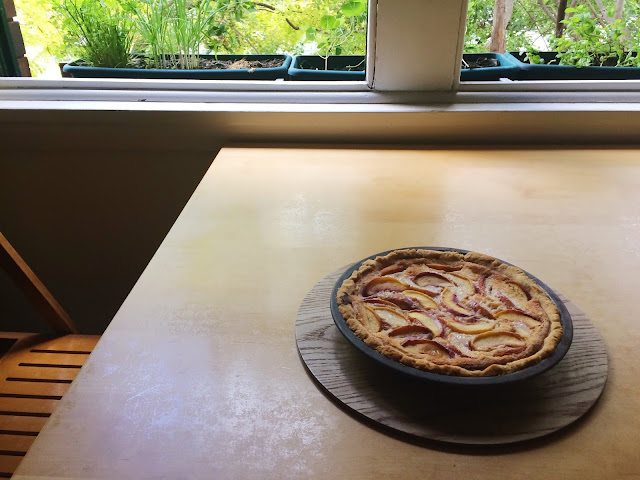 Nora Ephron was a writer. Though she wasn't a food writer, all of her work, in one way or another, features food - from her screen adaptation of Julie and Julia (about how Julia Child became Julia Child), to perhaps her most-well known script When Harry Met Sally (whose most memorable scene takes place in Katz's Deli) to an early novel of hers I read just a few weeks ago, titled - memorably, perfectly - Heartburn. The book is the account of a marriage ending. Its heroine is a food writer who discovers her Washington journalist husband is having an affair while she is pregnant with their second child. It's funny, it's heartbreaking, it has recipes. Just like life. 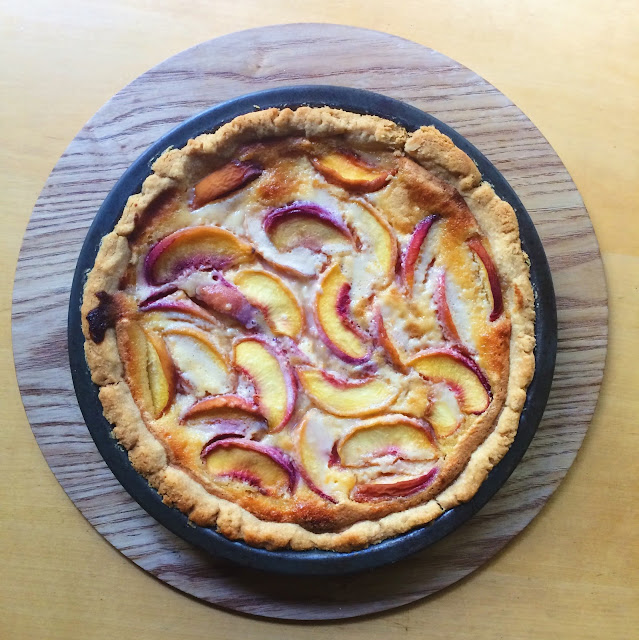 To all those people who think making pie is hard (and that includes me), this recipe is for you. It's so simple, it's not even written in recipe form in the book, just unfolds in a few sentences. And in actuality, it really is that easy. No need for rolling pins, resting times, or chopping more than three pieces of fruit, it really is a marvel. Ephron's heroine makes hers at a lake house in West Virginia over summer, a time you're so hot and lazy you really can't be bothered to cook at all. It's the sort of thing that is perfect holiday house food - no need for fancy ingredients, or heavy reliance on an unfamiliar oven. The crust is crisp and buttery, the filling oozy and extravagant with the juicy sweetness of ripe peaches. Nora knows her stuff. 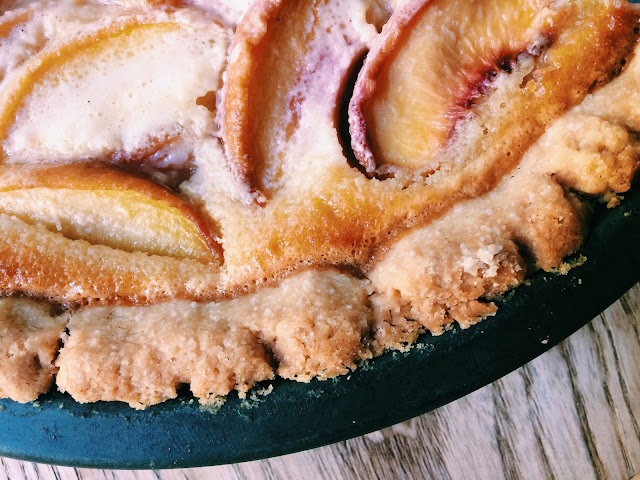 Heartburn is said to be a thinly veiled account of the end of Ephron's own marriage - to Washington Post journalist Carl Bernstein, memorably portrayed by Dustin Hoffman in All The President's Men. Heartburn itself was made into a film in 1986, with Meryl Steep and Jack Nicholson, and is every bit as delicious as this pie. 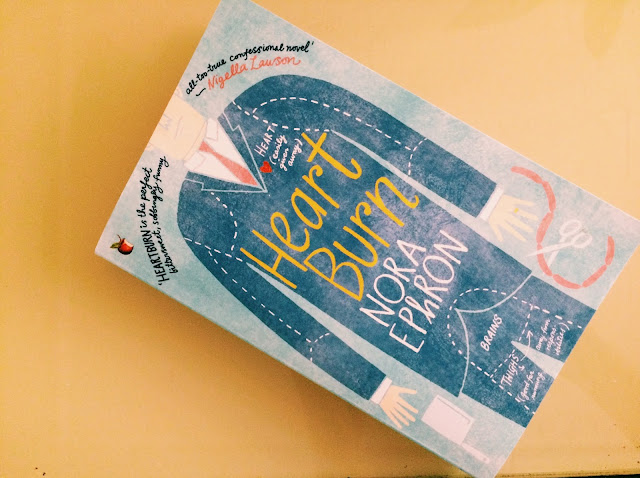 Though she'd achieved so much in her career, Nora Ephron died too soon in 2012. She is survived by her husband, writer/producer Nick Pileggi, and her two sons, Jacob and Max. In addition to her screenplays and novels, she wrote a lot of essays. In one - much earlier in her life - she reflected on dying and, as ever, came back to food. The New York Times included it in her obituary of June 26, 2012:


Ms. Ephron’s collection “I Remember Nothing” concludes with two lists, one of things she says she won’t miss and one of things she will. Among the “won’t miss” items are dry skin, Clarence Thomas, the sound of the vacuum cleaner, and panels on “Women in Film.” The other list, of the things she will miss, begins with “my kids” and “Nick” and ends this way:

Coming over the bridge to Manhattan

I am going to just print the recipe exactly as it appears in the novel because it is perfect. A Cuisinart is a brand of food processor. Any will do. Only when transcribing the recipe did I see that it called for the peaches to be peeled. I didn't do that and was so pleased with my pie I couldn't imagine it could be any better. I'm sure Nora would approve of my minor (unconscious) adaptation.


Last summer they came to visit us in West Virginia and Julie and I spent a week perfecting the peach pie. We made ordinary peach pie, and deep dish peach pie, and blueberry and peach pie, but here is the best peach pie we made: Put 1 1/2 cups flour, 1/2 teaspoon salt, 1/2 cup butter and 2 tablespoons sour cream into a Cuisinart and blend until they form a ball. Pat out into a buttered pie tin, and bake 10 minutes at 425°. Beat three egg yolks slightly and combine with 1 cup sugar, 2 tablespoons flour and 1/3 cup sour cream. Pour over 3 peeled, sliced peaches arranged in the crust. Cover with foil. Reduce oven to 350° and bake 35 minutes. Remove the foil and bake 10 minutes more, or until filling is set.