Pumpkin chowder with rice and thyme 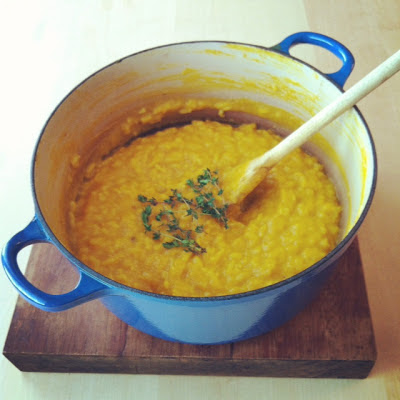 Sometimes, life is hard.  And for those times, there's soup.  It's kind of like the edible equivalent of a hug - warm, comforting, generous.  Here, outside my window in Sydney, the leaves flutter pale green and new on the trees.  Spring is definitely in the air but there are still just enough cool days left to wear jumpers, work indoors without resentment and... make soup.  Once you have a pot on the stove, bubbling away, you can relax, knowing that for all the other things that might be swirling around your head, at least you're fed.  And fed well. 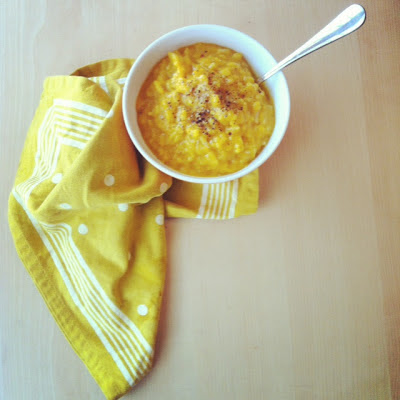 There's something about pumpkin soup in particular, that defies difficulty.  I think partly just because of its relentlessly cheerful colour.  While I find a lot of blended vegetable soups bear an unfortunate resemblance to baby or else retirement home food, this one is neither bland or fusty.  The cinnamon imparts a lovely, warm flavour to the pureed pumpkin, the red onion a subtle sweetness, the chilli a nice kick, and the rice an unexpected texture, and a satisfying starchiness.

For those who'll have a spare pumpkin or three lying around next week, this one's for you.


Pumpkin chowder with rice and thyme

Adapted from Claire Ferguson's Rice: From Risotto to Sushi.

Though the recipe below gives instructions for cooking the rice, I'm often making this soup to use up leftovers I have in the fridge from a previous night's meal.  This cuts down on preparation time and happily, dishwashing too.

Cube pumpkin and put in a pan with the onion, stock, chillies, salt, cinnamon, thyme and bay leaf.  Bring to the boil, cover and cook for 20 minutes or until done.  Meanwhile, put the rice in another pan with boiling water to cover by 2.5cm (1 inch).  Bring to the boil, cover, reduce the heat and simmer for 15 minutes until most of the water has been absorbed.  When the vegetables are soft and pulpy, remove and discard the bay leaf and thyme.  Reserve the cinnamon.

Using a blender or food processor, puree the soup in batches to a creamy consistency.  Add the drained rice and milk, then taste and adjust the seasonings.  Bring to the boil, simmer for 5 minutes and serve with thyme sprinkled over the top or a few good grinds of black pepper.