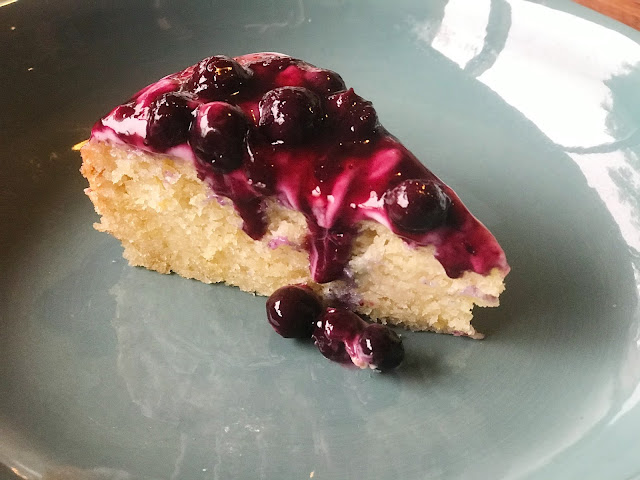 If you're a baker, words that will strike fear into your heart are "I'm a vegan". A cake without eggs or butter, or any sort of dairy at all seems somehow lacking in essential joy, not to mention texture or taste. At least that's what I would have said last week. 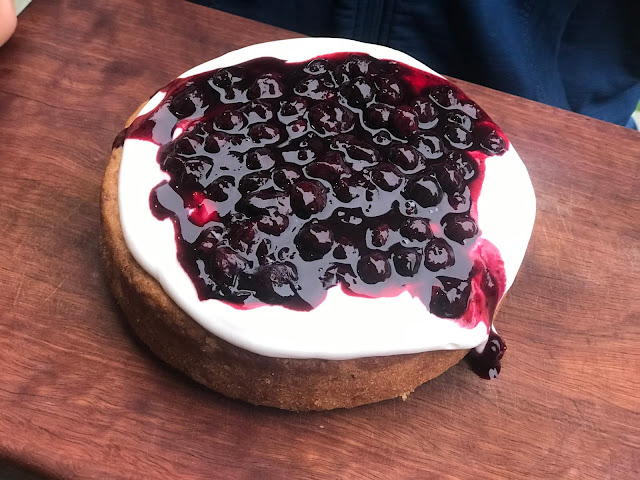 A good friend of mine recently had a birthday. She had also recently become vegan. As luck would have it, I'd just seen an episode of one of Nigella Lawson's cooking shows in which she'd made something she called a lemon tendercake. It looked absolutely delicious and amazingly, happened to contain no animal products whatsoever. Better still, it called for no strange substitutes, featured flavours I loved and honestly couldn't have been easier to make. The miracle ingredient here is coconut. The creamy milk binds the batter and a yoghurt made from it (you don't have to make it yourself - it's readily available in supermarkets) serves as a sort of icing, adding an thick tang to the lighter than air lemony cake below and the sharp sweetness of the blueberries above. All together, it really does look quite spectacular and it made my friend very happy. This is a great cake not just for vegans but for all of us trying to reduce our dependence on animal products in the midst of this climate crisis. And an extraordinary cake in its own right. 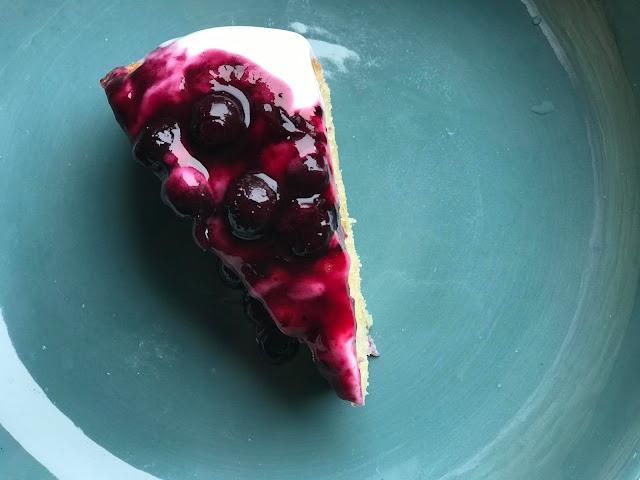 Lemon tendercake
Adapted from an original recipe by Nigella Lawson

When you're measuring out the coconut milk, don't shake the tin - you want as much of the thick, creamy stuff from the top as you can get. Just a note: this is the sort of cake that's best served as at home rather than at a picnic as in its finished form, it's not so transportable. But if you wanted to pack the compote and topping separately to the cake, you could easily assemble anywhere.

Topping
250g coconut milk yogurt
1 tsp vanilla extract
2½ tsp icing sugar
Preheat the oven to 180°C/160°C Fan/350°F.
Grease the sides and line the base of a 20cm springform cake tin with baking paper.
Combine flour, baking powder, bicarb soda and salt in a large bowl.
In another medium-size bowl, whisk the oil, sugar and coconut milk together, then mix in the lemon zest, lemon juice and vanilla.

Pour the wet ingredients into the dry, whisking to combine, then pour batter into prepared tin and bake for 30-35 minutes or until the top is golden and a skewer inserted into the middle comes out clean.

Sit cake on a wire rack and leave to cool completely in its tin. Don't panic if it sinks slightly during this period.

In the meantime, make the blueberry compote by combining berries, juice, sugar and the 50ml of cold water in a saucepan. Bring to the boil, then turn heat down and simmer, stirring gently every so often, for a couple of minutes until the blueberries have softened. Remove from heat. In a teacup (or some sort of vessel similarly small) mix the extra 1½ tsp of cold water with the cornflour and stir the resultant paste into the blueberry mix. Put the pan back over the heat and stir gently for about 30 seconds. The sauce will bubble and thicken - if it seems too jammy, just add a little more water. Let cool.

For the topping, mix the coconut yoghurt and vanilla together and sift in the icing sugar, stirring to combine.
When ready to serve the cake, remove it from its tin. Dollop the creamy coconut topping on top, spreading it to almost the edge, then gently spoon over the blueberry compote (you might need to loosen it with a fork if it's set too much). Don't worry if this causes it to spill over the sides - that's part the cake's voluptuous charm. Serve immediately.